Istanbul is amazing. Its one of the best cities i’ve been to thus far. It has delicious food, colourful bazaars and beautiful architecture. I don’t like visiting a city twice but i can happily visit Istanbul again and again. Heck, i can even live there. So here are 8 unmissable things you should do if you visit Istanbul.

Sultanahmet is home to the city’s most important attractions like Hagia Sophia, Topkapi Palace, Basilica Cistern and the Blue Mosque. No visit to Istanbul can be complete without visiting all these places. We visited these attractions over the space of a few days:

This is one of the world’s architectural wonders and Istanbul’s most famous attraction. It was first built between 532 and 537 as an Orthodox cathedral from the Byzantine Empire. It was the seat of Patriarch of Constantinople (the “Orthodox Vatican”). After 1453, Sultan Mehmed II from the Ottoman Empire converted it into a mosque. Islamic elements like the mihrab, minbar and four minarets replaced Christian features of the alter, bells and iconostasis. It remained a mosque until 1931 when it was turned into a museum showing the greatest work of Islamic art. Sophia is the Latin phonetic spelling of the Greek word for wisdom.

This is a world-known landmark and is a grandiose mosque with six minarets. It was completed in 1616 and is considered the last imperial mosque of the city. Sultan Ahmet I commissioned the building and his intention was to surpass both Suleymaniye Mosque and the Hagia Sophia. In an attempt to emphasise Islam’s superiority over Christianity, the larger Blue Mosque was built opposite Hagia Sophia on the site of the Byzantine royal palace. Only 2 mosques have 6 minarets: the Blue mosque and the central mosque of Mecca. The latter now has 7 minarets to emphasis its status. 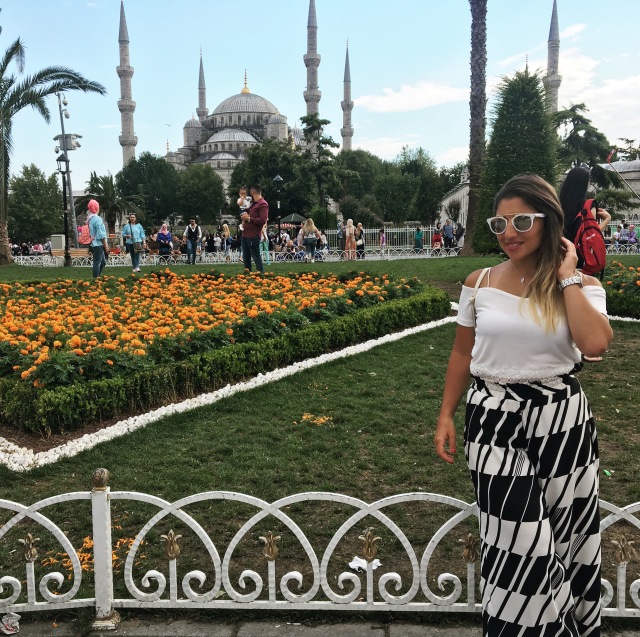 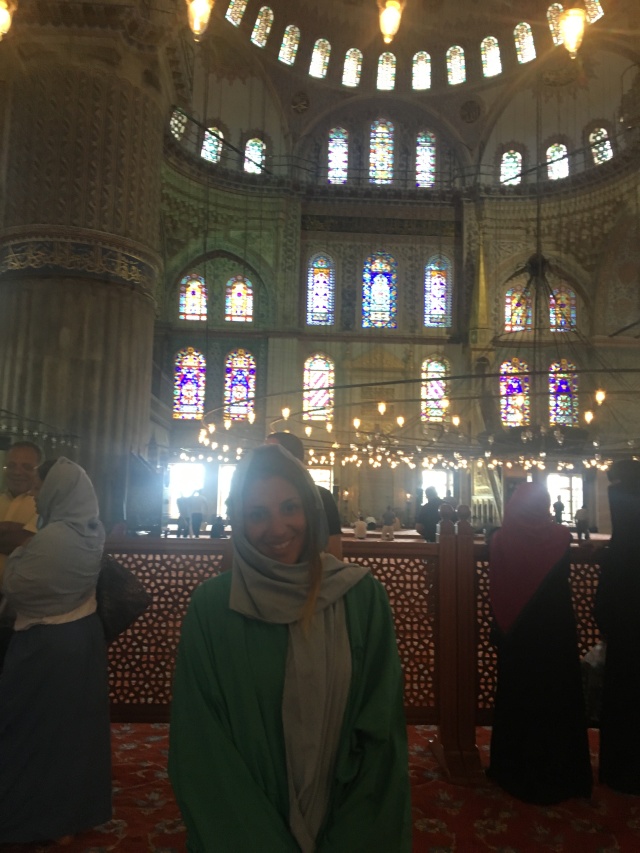 The Basilica Cistern was built in the 6th century and used to be the city’s largest underground water reservoir in Byzantine times. Its purpose was to ensure the city’s water supply even in time of droughts and sieges. I came here with my sister and apart from the two Medusa heads at the far end, found it rather disappointing.

We spent all morning of our second day here at the beautiful Topkapi Palace. This used to be the Ottoman Sultans’ prime residence for almost 400 years. Beside the sultan’s residence the palace contained offices, the seat of government, a Harem and also a military training ground for Ottoman soldiers. After the fall of the Ottoman Empire (1921), the government turned the Topkapi Palace in a museum of the imperial era in 1924. The museum now houses such invaluable treasures as the 86-carat Kasikci Diamond, the Topkapi Dagger and what i personally found most interest, Prophet Muhammad’s clock and sword. 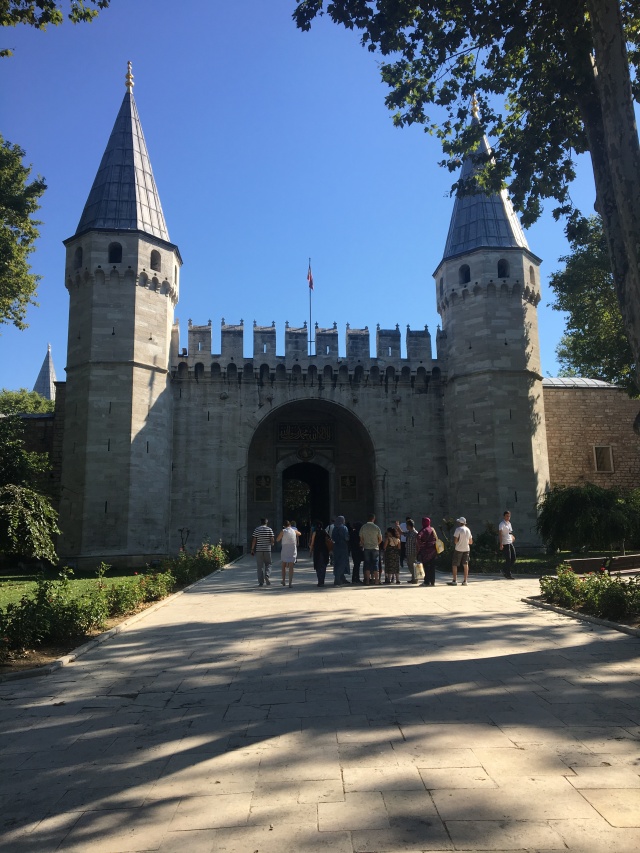 2. Take a ferry ride down the Bosphorus

We took a ferry service costing only 12TL for an hour an a half along the Bosphorus. It was nice seeing Istanbul from a different viewpoint. Even though we didn’t have time to – i would suggest doing the cruise at sunset as it adds that little extra magic. I made friends with the captain – delightful. 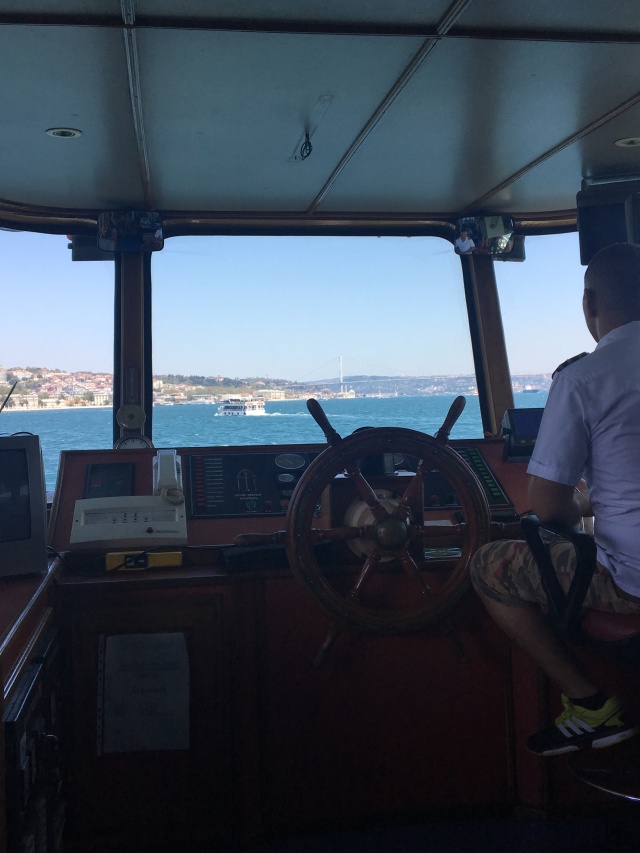 3. Go to Taksim Square at nighttime

Taksim Square is the main square of Istanbul’s New Districts. It lies on the east end of the busy shopping street, Istikal Caddesi (Independence Avenue). Taksim comes from the Arabic meaning ‘division’ or ‘distribution’ and use to be the point where the main water lines from the north of the city were collected to be breached off to other part of it. This square is a common meeting point for locals and the venue of many public events such as concerts, parades, new year celebrations etc. We were there during a festival and there was live music and street stalls. We ate the best shawarma on Istiklal Street. 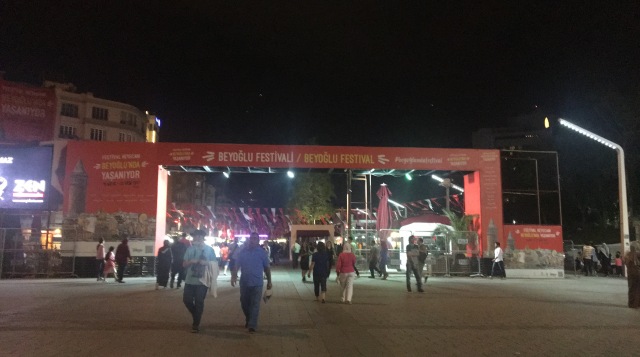 4. Get lost in the Grand Baazar

This is one of the most visited tourist attraction in the whole city as its the world’s oldest covered market. The atmosphere here is just dazzling as there is another never-ending hive of activity. You can find rows and rows of shops selling everything from silver jewellery, colourful lantern to clothes. The amount of times we got lost in this unique maze of Turkish goods was uncountable, yet enchanting. I bought a lovely galabeeya from here and some other souvenirs.

So we actually did it the other way as we walked all the way from Istiklal Avenue down to Galata Tower and then across the bridge. Even though it was shut when we to the tower, the Galata Tower is open to the public, and has been since 1967. The tower was built by the Genoese built the tower in 1348 and called it ‘Christea Turris’ which is latin for Tower of Christ and was part of the fortifications surrounding the citadel of Galata. According to travel stories (called Seyahatname), Hezarfen Ahmet Celebi, a 17th century aviator, overflew the Bosphorus from Galata Tower using artificial wings for gliding. From the 18th century, Ottoman Turks used the tower for spotting fires in the city as it has the best 360 degree views of the city. After a storm destroyed the tower’s conic roof in 1875, Galata Tower remained without a top until the 1960s. Its one of the city’s most striking landmarks.

From the tower, we walked down cobbled streets to the Galata bridge. Even though we were all rather exhausted at this point, it has a romantic appearance and had stunning views over the Golden Horn. This is a two-level concrete bridge that spans Bosphorus at the Golden Horn. The original Galata bridge, which was the first bridge spanning the Golden Horn was built in the early 20th century. However, the Turks realise that this bridge was becoming insufficient for modern traffic, which led to the current Galata Bridge being built in 1994. Apparently, Leonardo da Vinci designed a revolutionary new bridge in 1502 for Galata Bridge’s current location. If this was built, it would have been the longest bridge of the time. The lower level of the bridge is lined with restaurants and cafes and the upper level offers beautiful panoramic views of Istanbuls olds town. We spotted hundreds of fishermen standing along the railing trying to catch the biggest fish of the day. 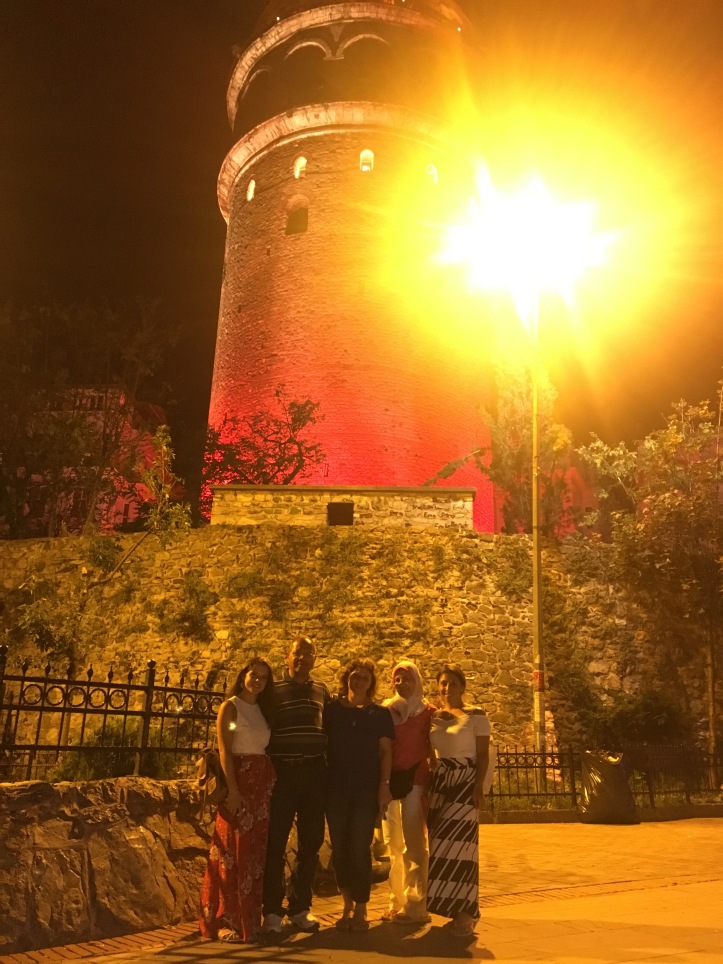