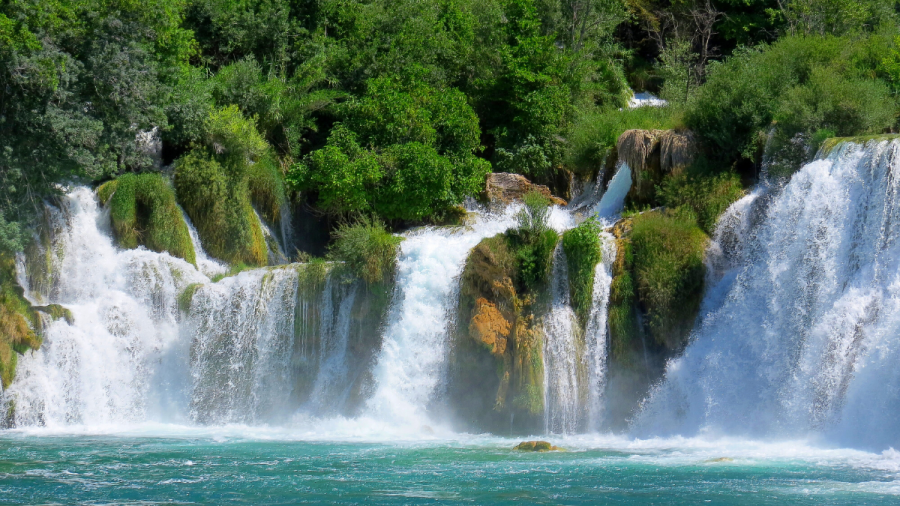 From Split to Krka National Park

The drive from Split to Krka is about 1.5 hours long. The two most common ways of entering the park from the south is either through Skradin or Lozovac town. We went through Lozovac as it was the official entrance of the park and also had free parking, which Skradin was lacking. It’s not hard to miss with clear signposts indicating the entrance.

Krka National Park has an interesting landscape and history. Due to its 7 unusual waterfalls, heritage sites and the huge amounts of fauna and flora (1022 plant species!), it was granted national park status in 1985. What really makes these waterfalls different is the fact they’re travertine waterfalls, created by barriers made from limestone that has settled out of the water and onto organisms like moss and algae. The limestone only grows about 1cm each year. The consequence of this is the creation of these amazing geomorphological formations. Krka National Park is much smaller than Plitvice Lakes, but still offers lush green forests, turquoise wading pool and lots of waterfalls. Even though I personally haven’t been to Plitvice, I’ve been told that Krka is less-crowded meaning that you could appreciate the quality of the day. I was told that the only difference between the two lakes is the size.

Arriving at the park was unremarkable – in the sense that it looks like any other nature reserve. But that view all changed as we began our hike. We started making our way through the park via the over-water wooden paths than went through the forest in all directions. There is a basic trail loop that takes you past the main swimming area and takes about 40 minutes if you walk quickly, longer if you leisurely stroll. This is the path we took but there are lot of different trails throughout the park. Even though it was an extremely hot day, the walking path above the water was almost always covered by trees, which made the stroll even more enjoyable.

Once we arrived at the main waterfall where you could go swimming – I remember just standing there, appreciating that this is the most serene natural wonders I have ever seen – it looked like something out of Peter Pan’s Never Never Land. There were hundreds of waterfalls pouring into small pools that were as green as emeralds. The pool itself was crystal clear.

After finding a good spot to set a base, we decided to take off our clothes and walk into the lake. What we did not expect, however, was how cold it was and how difficult it as to walk on the elevated limestone ridges against the strong current. After helping my sister and father into the lakes (and almost breaking my arm in the process), we all tried to reach the end of the roped off area just so that we could swim.

It was the most beautiful waterfalls I have ever been to and had such a great day out. A visit to these lakes are a must when visiting Split.

One thought on “The Waterfalls of Krka National Park”